The University of Louisiana at Lafayette’s more than 19,000 students attend a world-renowned research institution spread across a 1,500-acre campus of handsome red brick buildings and natural beauty.

Things looked far different circa July 14, 1898. That’s when it all began for the new Southwestern Louisiana Industrial Institute.

The first brick was laid in 1900, and then classes began in September 1901. Enrollment topped out at 145 students. A few classrooms dotted a patch of barren farmland. Degree programs included agriculture, stenography and mechanics.

The University’s first president? He was one of the nation’s youngest, a 27-year-old named Edwin Stephens. History has nevertheless proven Stephens had the right vision for the fledgling agricultural college.

Today, Dr. Joseph Savoie, the University’s sixth president, oversees the state’s second-largest public institution. The University is an international leader in computer science, engineering and nursing. But that only counts a few of the more than 240 stellar undergraduate, graduate, and doctoral programs. Or, to put the last century or so in perspective, enough degree options to outnumber the entire original student body.

Scroll through the University's past using the L'Acadien yearbook digital archive. From the early 1900's to the 2020's, you'll get to see what life was like on campus. 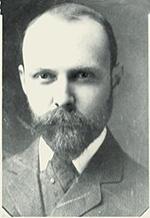 Dr. Edwin Lewis Stephens was 27 years old when he was named the first president of Southwestern Louisiana Industrial Institute (now the University of Louisiana at Lafayette) on Jan. 23, 1900. SLI, which was created by the Louisiana Legislature in 1898, had no campus, no faculty, and no students. So, he began to build it from the ground up.

In January 1901, Stephens planted oak seedlings on campus. Many flourished, a few remain — at the intersection of University Avenue and Johnston Street — and are known as the Century Oaks.

When SLII began offering classes, it was a vocational educational institution. In 1921, it became a four-year college and dropped "Industrial" from its name. By 1932, it was accredited as a College of Teacher Education, with degrees ranging from art to biology to physical education.

Stephens was known among his colleagues as an inspiring leader who encouraged faculty and students. During his administration, he established the alumni association and oversaw construction of several buildings including the DeClouet, Foster, and O.K. Allen halls and the original administrative building, which was known as the Main Building. Baseball, football, and track teams were established, as were The Vermilion newspaper and L'Acadien yearbook.

Stephens retired as president in May 1938 and died in New Orleans less than seven months later. 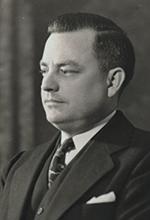 Lether Edward Frazar succeeded Stephens in 1938. Although he served only two and half years, he supervised the construction of many campus buildings, such as the president's house, Mouton Hall, Broussard Hall, Burke Hall, Hamilton Hall, Earl K. Long Gym, and Stephens Memorial Library. He also helped the University grow through the purchase of additional land, primarily the former Whittington estate.

Frazar, who was 34 years old when he became the school's second president, developed the College of Agriculture and the College of Engineering, and added the departments of music, commerce and publicity.

He also created the marching band and the school's first intercollegiate athletic program.

Frazar resigned from SLI in 1940. He went on to serve as a state representative, dean of McNeese State College, and as lieutenant governor of Louisiana during the Earl K. Long administration. He died in 1960. 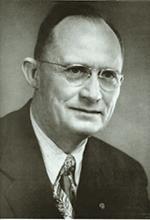 Dr. Joel Lafayette Fletcher Jr., who became the University's third president in 1941, was known for his personal interest in students' welfare.

Any student who was planning to resign from SLI was required to first talk with Fletcher so the president could determine whether anything could be done to enable him or her to stay in school.

As dean of the College of Agriculture, he had taken advantage of the National Youth Administration and the Works Projects Administration to provide jobs for poor students who needed money to attend SLI. Some of those students grew vegetables on the school's farm. Others worked in campus offices. Many worked in the dairy, where they made cheese and butter.

He served as president of SLI during World War II. After the war, he helped veterans return to school to complete their education.

Under his administration, the University officially integrated in 1954, and was the first school in the deep South to do so. The next year, Fletcher oversaw the creation of the SLI Foundation.

In 1960, SLI earned university status, which enabled it to change its name to the University of Southwestern Louisiana. 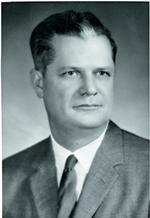 Dr. Clyde L. Rougeou began teaching at SLI during Stephens' presidency. He was head of the Department of Animal Husbandry before being named the institution's fourth president.

From 1966 to 1974, Rougeou guided the University through a critical period of rapid growth and curtailed budgets. During his term, enrollment rose from 8,400 to more than 12,000 — a 43 percent increase. 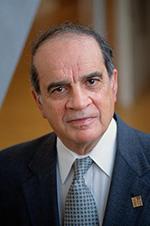 The University's fifth president, Dr. Ray P. Authement, began leading the institution in 1973 when his predecessor, Dr. Clyde L. Rougeou, took a year's leave of absence. When Rougeou retired, Authement became president. He served for 34 years, earning the distinction of being the longest-serving president of a public university in the United States.

Throughout his career, Authement had an affinity for students who were the first in their families to attend a university. He grew up in Boudreaux Canal, a small fishing community in south Louisiana. Although neither of his parents had advanced beyond the 7th grade, they valued education and encouraged their son to excel. Authement entered SLI in 1947 with a small scholarship. He majored in physics and began his teaching career when he was a senior, as a lab instructor.

After earning master's and doctoral degrees in mathematics, he taught at Louisiana State University and McNeese State University before returning to SLI as an associate professor of mathematics in 1957. Two years later, he was named a professor. He continued to teach until 1966, when he was promoted to academic vice president. By then, SLI had become USL. In 1970, he was promoted to vice president, the position he held until Rougeau's departure.

During his tenure, he oversaw the University's evolution from a regional institution to one worthy of national and international attention. Over almost four decades, the University: 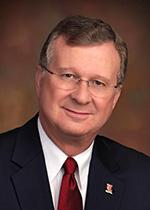 Dr. E. Joseph Savoie returned to his alma mater as its sixth president in July 2008. He was formerly the Commissioner of Higher Education for the State of Louisiana, where he was involved in several major postsecondary education reforms, including the restructuring of higher education governance, creation of the Louisiana Community and Technical College System, and teacher education and school reform initiatives.

Prior to his appointment as Commissioner of Higher Education, he served in many roles on the UL Lafayette campus, including vice president for University Advancement, executive director of the Alumni Association, program director for the Union Program Council, student government advisor and adjunct assistant professor. He holds bachelor’s and master’s degrees in education from UL Lafayette and earned a doctor of education in educational leadership and administration from Columbia University’s Teachers College in New York.

Under his leadership, the University has affirmed its commitment to its core mission of education and is developing a blueprint for future growth. It has developed a strategic plan to further academic success by improving retention rates and increasing the number of graduates.

Soon after his appointment, Savoie initiated a comprehensive review of academic offerings that has led to the creation of new degree programs, including master's and doctoral degrees.

With the construction of new residence halls, the University has increased its capacity for student housing by 37 percent and created living-learning environments, where students with similar interests live and study together. And, students, faculty, staff and community members helped create a master plan for the campus that addresses issues such as facilities, transportation, and housing.