"My favorite part has to be the student culture. Life on campus is busy and filled with student interaction, and most of the student organizations are very inclusive and active. Additionally, UL Lafayette's students have carved out a place for themselves in the city, specifically in the downtown area."

I am from Hammond, Louisiana.

I am currently a student at the University of Louisiana at Lafayette majoring in Spanish.

I will attend graduate school with the goal of becoming a teacher or interpreter.

Spanish major Wyatt Beachy is creating a positive impact at the University of Louisiana at Lafayette. Born in Hammond, Louisiana, Wyatt decided to attend UL Lafayette for many reasons, “UL Lafayette’s atmosphere is unmatched in my opinion: the campus is just small enough to be convenient, but just big enough to feel impressive,” he said. “Additionally, Lafayette is a great city to live in with tons of activities and places. Put simply, it’s an ideal place to pursue a formal education whilst enjoying the city around me.”

Languages can coexist together

Wyatt chose to major in Spanish and minor in English because of his love for linguistics.

“I love the study of language and literature, so it felt natural to go for a minor in English as a supplement to my major. A lot of the skills learned through English courses go hand in hand with the development of a second language anyways; having a better grasp of my native language allows me to foster a deeper understanding of Spanish.”

Wyatt sees a real opportunity in leaving an impact on people’s lives through the field of Spanish. He has been intentional with his course choices and believes this will be beneficial towards his success.

He said, “I greatly enjoyed taking Magical Realism with Dr. Bary, which I took in my sophomore year. Magical Realism is a genre that’s central to contemporary Latin American literature, so learning more about its history and some of its famous works was a great experience.”

Through his studies at UL Lafayette, Wyatt understands the power of comprehending and using linguistics for the betterment of others, “Intro to Linguistics with Dr. Winters, which I took in my junior year, was very enjoyable as well. Learning not just about the intricacies of the Spanish language, but also about the history and development of the language was both informative and practically useful,” he said.

His favorite English course is Talking Policing Blackness in Film taught by Dr. Seger and his favorite elective course is Contemporary Social Problems.

He said, “Contemporary Social Problems with Professor Kahanek, which I took in my freshman year, was a very useful course for me. Although sociology is outside the bounds of my major/minor requirements, as someone with a keen interest in social issues, this course was immensely valuable. Learning about the sociological problems inherent in our world enabled me to view society through a different lens.”

Getting involved on campus enhanced Wyatt’s overall University experience. He is the treasurer of the Ragin’ Cajun Climbing Club and works as a rock wall setter at Bourgeois Hall.

He said, “Climbing is a great passion of mine and being an executive officer within the club enables me to actively pursue this passion while meeting more people who share my interests.”

He is also the president of the UL Spanish club and the Alpha Rho chapter of Sigma Delta Pi.

“Being the president of these two organizations gives me the opportunity to meet and interact with other students interested in the study of Hispanic language and culture.”

Wyatt is currently working alongside Dr. Bary on a research essay. The essay is based on a Spanish work of literature titled, El Reino de Este Mundo by Alejo Carpentier.

“My essay focuses on a reading of the work through the lens of Black studies and how the Haitian revolution is ultimately depicted in an anti-Black manner. The essay is a work in progress, but I hope to seek publication soon.”

Wyatt is enjoying his education experience at UL Lafayette and encourages students to bet on themselves.

"My favorite part has to be the student culture. Life on campus is busy and filled with student interaction, and most of the student organizations are very inclusive and active. Additionally, UL Lafayette's students have carved out a place for themselves in the city itself, specifically in the downtown area. In summary, being a student here is a multifaceted and fulfilling experience.”

He plans to go to graduate school and would love to become a teacher and or professor, or potentially an interpreter. Wyatt believes that his current research project and skills obtained are preparing him for graduate school, “I’ve also gained very useful academic skills, such as higher-level writing and research, that will make entry into graduate school assuredly easier.” 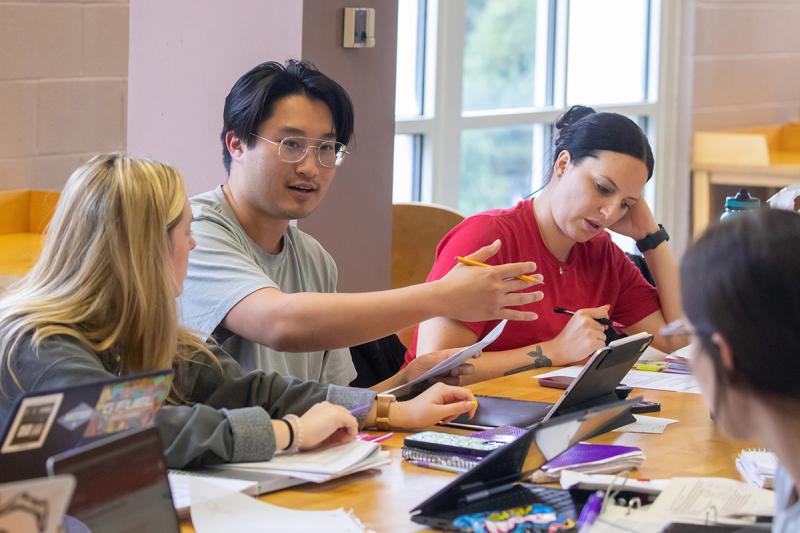