"My favorite part about being at UL Lafayette would definitely be being a part of the Ragin’ Cajuns Water Ski team. I’ve been lucky to have a great team and a very successful team – we've won two national titles (while I’ve been on the team).”

I’m from Ontario, Canada, where I began my career as a professional athlete in water skiing.

I’m going to continue as a professional athlete while working toward my future biomedical engineering career.

When deciding where to go to college, Jaimee Bull had two things to consider: her current career as a professional water skier, and her future career in the medical field.

“I knew that I wanted to come to a university that had a water ski team and UL Lafayette has one of the best water ski teams in the nation,” she said. “And my brother had gone here. So, I knew that the school was respected back in Canada, because I definitely wanted my degree to be able to transfer home.”

An Opportunity to Study Biomedical Engineering

“I wanted to do something that allowed me to have a degree that I could work with straight out of college if I wanted to,” she said. “At home, we have biomedical engineering, and it gives you a pretty broad view of the medical field. So, I was like, ‘okay, perfect, I'll get an engineering degree and I'll get to see many sides of the medical field to allow me to see where I may want to specialize.’”

While Jaimee wanted more of a specialized biomedical major, the professors in her mechanical engineering classes supported her with projects that were focused on her interests.

“My special topics project is detecting scaphoid fractures through machine learning,” she said. “So, we're taking a bunch of X-rays and teaching a computer to detect the fractures so that doctors don't miss some fractures. Or they can walk in and have the backup support of having the computer detect and isolate the region that the fracture is in.”

“So even though that class is strictly mechanical, my professors definitely, allowed some flexibility in the mechanical field to allow me to have more experience within the medical field,” she said.

“I've had some really standout professors,” Jaimee continued. “There's been a couple professors in the engineering department who have really taken interest in not only helping me through my academics, but also making sure that I can pursue my athletic career at the same time which has been amazing. They’ve also been great at trying to help us learn as much as we can and develop as many skills as possible throughout our time at UL Lafayette.”

Jaimee – who was already setting records for the Canadian National Team – decided coming to college wasn’t going to be the end of her water-skiing career.

“I'm a professional water skier,” she said. “We aren't NCAA so I can actually ski the pro circuit at the same time as skiing collegiate.”

“I definitely had some lofty goals going into the season but checked a lot more boxes than I was really expecting to,” she said. “I was pretty fortunate to have a great season, and be able to win some major titles, including Masters and also Open Worlds.”

“At Under 21 Worlds, it was awesome to see the amount of Ragin’ Cajuns we had there,” she said. “We had quite a few podium finishes. Our team's mainly international students and everyone's skiing at a high level outside of Collegiate skiing. We had a lot of people do well, which was really exciting to see.”

“My favorite part about being at UL Lafayette would definitely be being a part of the Ragin’ Cajuns Water Ski team,” she said. “I’ve been lucky to have a great team and a very successful team – we've won two national titles (while I’ve been on the team).”

“In my three years of competing, our team came second the first year by a very small margin to (UL) Monroe and then we won in 2019. And then we won again in 2021,” she said. “We also have individual events too. I ski in women's slalom, and then my score contributes to the team total. So, I won personally won women's slalom all three years which then contributed to our team’s total score.”

The support Jaimee got as a student athlete came from all directions.

“Being a student-athlete at UL Lafayette has been an amazing experience,” Jaimee said. “I've been lucky to have an awesome team. Training has also been really great here with access to Airport Lake, and the support of some of our team sponsors who have allowed us to have solid training conditions while being here.”

Being a professional athlete on top of a student-athlete and a full-time student isn’t easy.

“It's been a lot to balance,” she said. “I just go through and prioritize week for week what I need to do school-wise versus training-wise and pull a little bit from one or the other to make sure that I can try and maximize both.

“There's definitely times where it's tough — but I've been lucky to have good support through my professors and also through my team to allow me to balance school, pro skiing and collegiate skiing and try and do well in all categories,” she said.

“The school has been supportive of my athletics as well, which is great,” she said. “They're always encouraging student-athletes, and they've been willing to help me out on the side if I need help when I've missed a lot of school. They’ve also allowed me to make up missed tests when I return to campus so that I can travel and pursue the athletic part of my life without jeopardizing my academics.” 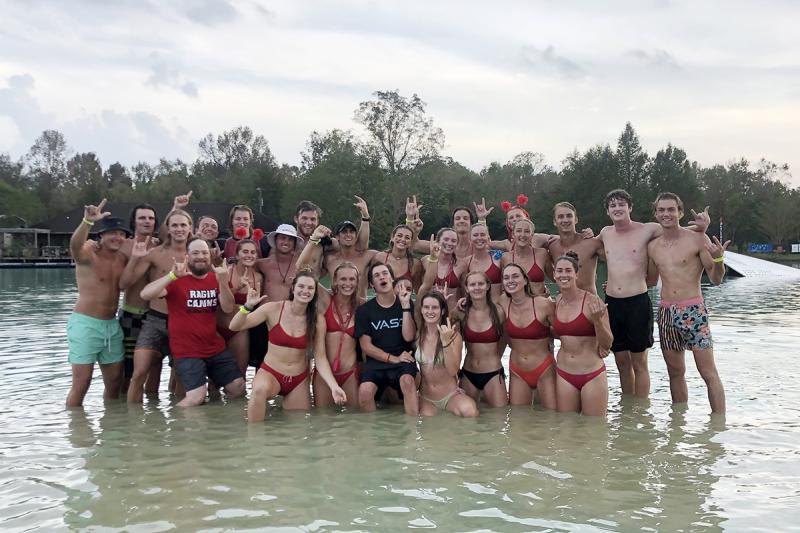